The Ancestral Supper at Samhain

Raven 279 Comments Off on The Ancestral Supper at Samhain 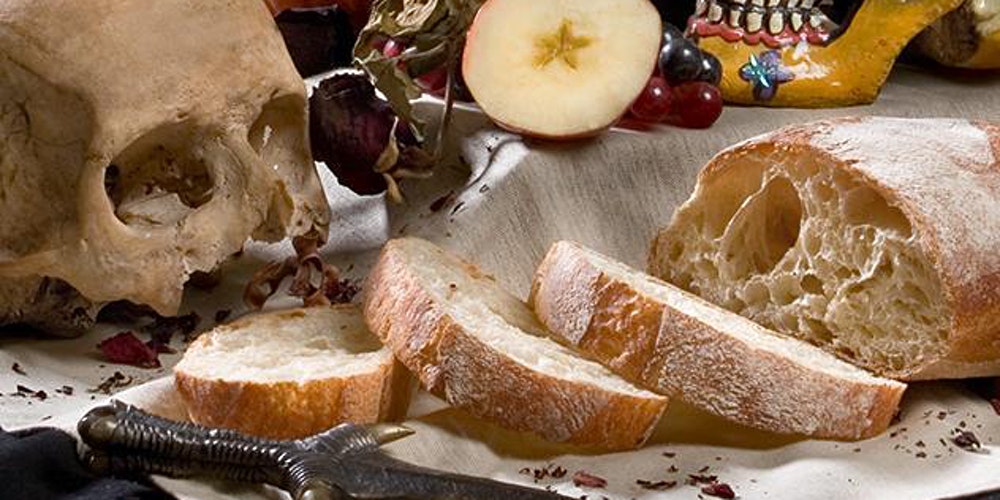 Samhain is the time of the year when the veil between the worlds is at its thinnest.  This generally means that connecting with spirits on the other side and journeying there is much easier – but this also means it’s easier for the other side to reach out and say hello. So if you are a medium, Samhain is always a time of extra shielding and protection.  Sometimes it’s all you can do to sleep at night!

These days Samhain has become trendy – we pagans are so in! Every day, we see people coming into our shop that wants to learn more about Samhain even though they are not pagan. I think the world is entering a whole new era, where spiritual practice and contact will become more accessible and more available to all. We are “waking up,” so to speak. And I think that the big push behind that is coming from ancestors.  They hope to lead us to a more balanced way of living, which is a good thing! 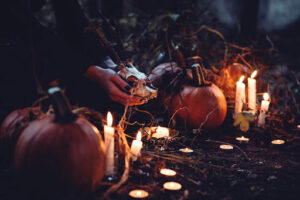 Samhain found its roots as a Celtic festival almost 2000 years ago.  They considered it the most important of the quarterly fire festivals celebrated at the time (today, we know many of these as the Greater Sabbats: Imbolc, Beltane, Lammas, and Samhain). During this time of year, hearth fires in family homes were left to burn out while they gathered the harvest.

After the harvest work was complete, celebrants joined Druid priests to light a community fire using a wheel that would cause friction and spark flames. The wheel was considered a representation of the sun and used along with prayers. Next, they sacrificed cattle, and participants took a flame from the communal bonfire back to their home to relight the hearth. Early texts present Samhain as a mandatory celebration lasting three days and three nights where the community was required to show themselves to local kings or chieftains. Failure to participate was believed to result in punishment from the gods, usually illness or death.

Ancient Celts celebrated their new year on November 1st.  This day marked the end of summer and the harvest and the beginning of the dark, cold winter, a time of year that was often associated with human death. Celts believed that the boundary between the living and the dead worlds became blurred on the night before the new year. On the night of October 31st, they celebrated Samhain when they believed that the ghosts of the dead returned to earth.

In addition to causing trouble and damaging crops, Celts thought that the presence of the otherworldly spirits made it easier for the Druids or Celtic priests to make predictions. For a people entirely dependent on the volatile natural world, these prophecies were an important source of comfort during the long, dark winter. The celebration consisted of a bonfire where they gave offerings to the Gods to gather their favor for the coming year.  Participants generally wore costumes made of animal heads and skins. 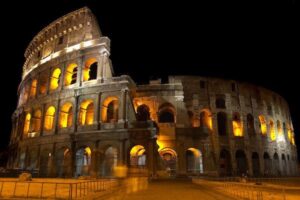 In 43 AD, the Romans came charging into Celtic territory.  They occupied those lands and ruled with an iron fist for over 40 years.  During this time, the Roman Festival of Feralia, which took place in late October to honor the dead, and the sacred day honoring Pomona, whose sacred symbol is the apple, merged with Samhain.  This is probably the reason why we bob for apples at Halloween!

In may of 609AD, Pope Boniface IV dedicated the Pantheon in Rome to honor all Saints and Martyrs in the Christian religion.  This led to the Catholic feast of All Martyr’s Day, which became established in the western church.  Later he moved the date from May to November 1st, and the celebration became known as All Saints Day. By the 9th century, Christianity had spread into Celtic lands, where it merged with and eventually supplanted the Celtic rites.  In 1000 AD, the church designated that November 2nd would be known as All Soul’s Day to honor the dead. Historians believe that the church was trying to replace the Celtic festival with a similar church-sanctioned holiday.

All Souls’ Day was celebrated similarly to Samhain, with big bonfires, parades, and dressing up in costumes as saints, angels, and devils. The All Saints’ Day celebration was also called All-hallows or All-hallowmas (from Middle English Alholowmesse, meaning All Saints’ Day). The night before, the traditional night of Samhain in the Celtic religion, began to be called All-Hallows Eve and, eventually, Halloween.

The Day of the Dead 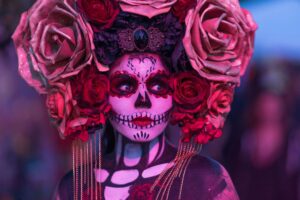 The Day of the Dead or Día de Muertos is an ever-evolving holiday that traces its earliest roots to the Aztec people in central Mexico. The Aztecs used skulls to honor the dead a millennium before the day of the Dead celebrations emerged. Like the ones once placed on Aztec temples, Skulls remain a key symbol in a tradition that has continued for more than six centuries in the annual celebration to honor and commune with those who have passed on.

Once the Spanish conquered the Aztec empire in the 16th century, the Catholic Church moved indigenous celebrations and rituals honoring the dead throughout the year to the Catholic dates commemorating All Saints Day and All Souls Day on November 1 and 2. Thus, in what became known as Día de Muertos on November 2nd, the Latin American indigenous traditions and symbols to honor the dead fused with non-official Catholic practices and notions of an afterlife. The same happened on November 1st to honor children who had died. 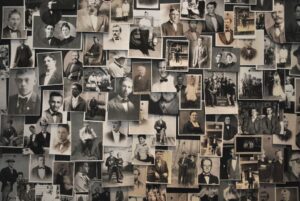 The dead are celebrated around the world, marking the importance of staying connected with our family Lineage. The dead are not gone, they live within us, and we can connect with them for support and knowledge that we need in our daily lives.  Regardless of origin, every culture has seen the benefits of celebrating its ancestry.  Anthropologists also discovered that even before becoming an agricultural society, our hunting and gathering ancestors also celebrated their dead and lineage.

Most funeral rites we have today arose the need to celebrate life, connect with those who no longer walk with us, and ease a soul’s transition to the other side. Our ancestors are intertwined in every aspect of our lives, and for a good reason. We came from them – we are made out of the same things they were made out of.  Our connection is more than physical. It is mental, spiritual, and emotional.  When honored, this connection can be a solid foundation for standing strong in your power.  You never walk this earth alone – you walk it with a team of thousands behind you that made your existence possible. 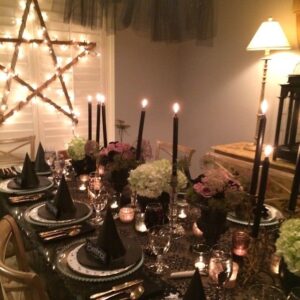 Often held during October in a private residence, the Dumb Supper comprises a three-course dinner served in reverse and observed in solemn silence. A popular sacred practice among Witches and Pagans, this ceremony is designed to help summon the souls of our loved ones from the other side so that we may give thanks and perhaps even commune with them once again. Although today, the meal is often not served in reverse, either can work for this celebration.

With a hotly debated history, the origins of the Dumb Supper are mysterious and largely unknown. However, It is widely thought to have evolved from a love ritual conducted on Halloween night which supposedly allowed young women to divine the identity of their future husbands.

Guests are asked to open themselves up to and invite their ancestors and loved ones who have passed away to come and dine with them. This type of ceremony is not a seance, and no mediums or psychics are used to relay messages from the dead. Instead, it is simply a tradition created as a way for guests to thank and remember the people who came before us.  The table is set for all of the guests.

All plates are made, and an extra plate is set – generally, this plate sits at the head of the table. Before anyone eats, all participants stand up and open their hearts to their ancestors.  In my coven, we generally hold hands when this is done. Then, we go around the table, and each participant calls an ancestor to join us.  We can go around the table multiple times until all ancestors we wish to honor are called. You can also call spirits of pets that have passed on or spirits of dear family friends. Once all have been called, you give thanks for their presence.  Everyone can then sit down to eat.  Generally, during this time, it is good to speak about those you called.  To share memories, laugh and cry and feel their presence within the group.

Once everyone is finished, the plate s generally placed on the Ancestor altar overnight, and in the morning, it is given back to nature by putting the contents of the place out in the woods or a small cluster of trees for the wildlife to come and take it. Generally, within days most of the supper is gone.

Many cultures throughout history have had some variation of rituals in which food is offered to the dead. However, perhaps more recognizable are the modern symbolic versions of remembering the departed that feature meals. An example of this is the “Missing Man Honors Ceremony,” in which empty place settings represent and honor soldiers missing in action.

Although the primary purpose of the Dumb Supper is not a focus on the manifestation of any form of paranormal activity, people who hold and attend them have often reported spirits revealing themselves in a variety of ways. Guests have recalled a ghostly touch, the scent of perfume, whispered messages, and even physical manifestations. This is a solemn event where respect for the dead is crucial. By remaining silent, you open your heart and mind to those who have crossed over and put them at the forefront of your thoughts. 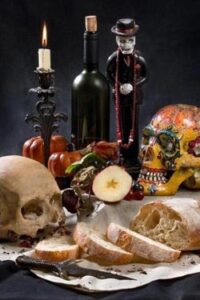 The name “dumb supper” comes from old traditions. “Dumb,” in this case, is a synonym for mute or silent, as the essential rule of the Dumb Supper was the complete silence in which it should be conducted. That meant no talking at the table.  Some still practice it in this manner, but in my coven, we generally prefer to speak about the ancestors and share memories about them that warms our hearts.  We feel that this truly brings them to your table and honors their memory.

Sometimes the Dumb Supper can also be commonly known as “The Silent Supper,” although this is a very modern term used to describe this type of ceremony. In my coven, we decided to change the name of this ceremony to the Ancestral Supper since it feels more appropriate. If you do not have a group to celebrate the ancestral supper with, you can do it yourself with just you and your ancestors. The important part of this ritual is to break bread with your ancestors and remember that they are still sitting at your table no matter what!

If you are interested in performing the above ceremony this Samhain, visit our sister site Raven Moonlight Botanicals for a printable Samhain 2021 Ancestral Supper Ceremony!