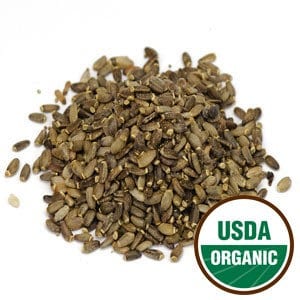 Milk thistle is a member of the sunflower family native to a narrow area of the Mediterranean. It has since been naturalized throughout Europe and can commonly be found in Oregon and California, where it is considered a common garden weed. Despite this unsavory reputation, milk thistle has quite a striking appearance, noted by the large pink or purple flower growing atop its solitary stem. The edible thistles were given the name Silybum by Dioscorides, a Greek physician who served in the Roman Army over 1,900 years ago. The thistle with white mottling on its leaves became known as the “milk” thistle. In Catholic Germany, its usefulness was said to be second only to calling on Mother Mary, and the white mottling on the leaf is said to be the touch of the Virgin Mary’s milk, hence the species name “marianum.”

The leaves of the milk thistle are edible and can be consumed as a potherb. However, commercial distribution is impractical because the thorns must be snipped off before preparation as a food item. Nevertheless, the leaves make a delicious addition to salads, tasting similar to lettuce. Three of the active compounds within milk thistle seed are collectively identified as silymarin. This constituent is credited for much of milk thistle’s medicinal value, particularly associated with healthy liver support. The German Commission E has approved an extract of 70% silymarin in supporting healthy liver function. The Commission has also approved milk thistle in its crude form for minor dyspeptic complaints.

Note: Like silymarin extract, milk thistle seed can cause mild diarrhea by stimulating the release of bile. This effect is most notable if there is a high-fat diet.

In ritual spells and magic, Milk Thistle is used for Wisdom and to improve decision making. It can also be used in blends for strength - when courage and strength are needed to stand up for yourself or a cause.

For educational purposes, only This information has not been evaluated by the Food and Drug Administration. This information is not intended to diagnose, treat, cure, or prevent any disease.
Shipping Costs Policies