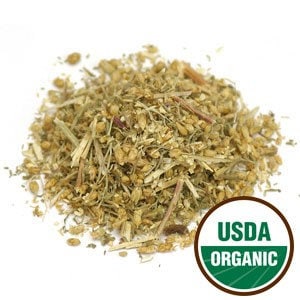 Yarrow is a long-stemmed member of the sunflower family found in the wild throughout the temperate regions of the Northern Hemisphere. It can be recognized by its highly segmented leaves (millefolium literally means "thousand leaves"), and the clusters of daisy-like white or lavender flowers at the top of the stalk. Greek myth had it that Achilles painted himself with a tincture of yarrow to make himself invulnerable to arrows, everywhere on his body except his heel. Native American herbal medicine makes extensive use of yarrow. Among the Micmac people of Maine, New Brunswick, and Nova Scotia, the stalk was chewed or stewed to induce sweating to "break" fevers and colds. They also pounded the stalks into a pulp to be applied to bruises, sprains, and swelling. The Cherokee, Gosiute, Iroquois, and Mohegan peoples used yarrow as a digestive aid. Other herbal healing traditions use yarrow to treat a variety of conditions characterized by swelling, often combined with echinacea, elder flower, ginger, and peppermint.

Note: Use with caution if you are allergic to ragweed. Its use is not recommended while pregnant.

Yarrow can be worn to protect the wearer and when held in the hand, it stops all fear and grants courage. Yarrow is also commonly used in love spells. It is said that carrying yarrow not only attracts love, but brings friends closer to you. The herbs can be made into an infusion and the resulting tea drunk to improve psychic powers. It is also used to exorcise a person, place or thing.

This information is not intended to diagnose, treat, cure, or prevent any disease
Shipping Costs Policies