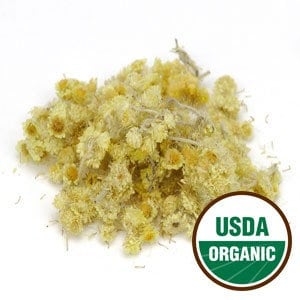 A native to the Mediterranean, the golden yellow flower heads of the helichrysum are collected before they open for herbal use to make aromatic, spicy, and slightly bitter teas. The name is derived from the Greek: helios meaning sun, and chrysos meaning gold. In areas of South Africa it has been used as an aphrodisiac and also as a food. Usually it is seen as a garden ornamental.

Helichrysum flowers are often used to improve the appearance of herbal teas. They are a key ingredient in the Zahraa tea popular in the Middle East. Any tea containing helichrysum should be strained before drinking.

An infusion of the bright yellow flowers is used in the treatment of gall bladder disorders and as a diuretic in treating rheumatism and cystitis. The dried plant is often used for decorative purposes along with, or instead of, its relative Helichrysum bracteatum.

Helichrysum stoechas is similar to the Helichrysum arenarium species, but the leaves are all linear, with rolled under Edges. It is found in western France on dunes near the sea.


In magick, Life Everlasting is used in spells for good health and Longevity, as well as for restoring youth. It can also be used to prevent sickness and disease.

For educational purposes only This information has not been evaluated by the Food and Drug Administration. This information is not intended to diagnose, treat, cure, or prevent any disease.
Shipping Costs Policies